Our clinic being located in the heart of south Delhi, we get a lot of patients who have the need and desire to look more youthful. Many patients are in search of solutions which would help them reverse ageing on their face. Some have been to many dermatologist in Delhi and around to help find the solution for their sagging skin and aged look.

Recently, we had a patient Mr N*, aged 60, he came all the way from Afghanistan to get a more youthful look and to get rid of his wrinkles. He came across as a very pleasing person but was much distressed because of the appearance of frown lines, forehead lines, sagging cheeks and deep naso-labial fold. During the initial consultation we laid out the options we had: Dermal fillers, thread lift, HIFU, fractional lasers etc. We also also asked him about what areas of his face concerned him the most and how much lift he desired in the midface. After an hour long discussion we finally zeroed down on Threadlift for his mid face and Botox in the upper third and crows feet. Why we chose not to use Dermal filler was because of the cost constraint, since the lift he wanted would have required atleast 5-6ml and he also had reservations about using it since once he had got under treated by it. 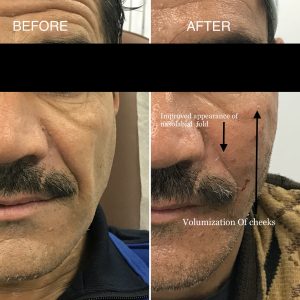 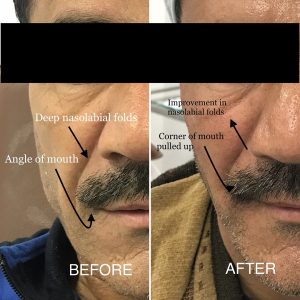 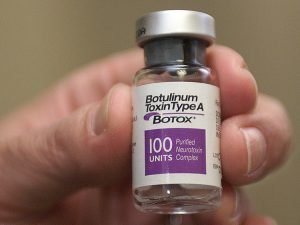 We injected Botulinium Toxin for him that very day, almost 40 units in the frown lines, forehead area and crows feet. After giving him the post care instructions, we then planned for thread lift after 4 days. We decided to put 8-10 COG threads to lift the nasolabial fold, corners of the mouth and the sagging jawline, 10 threads around the undereye were also planned since undereye area was of get concern to him.

On the 5th day patient walked in a little apprehensive since, the thought of threads being inserted under his skin wasn’t very comforting. We tried to allay his anxiety by showing him certain videos of our previous patients going through the same procedure. We then applied a topical anaesthetic cream, which stayed on for 30 mins. As we inserted the first thread on the left side of the patient’s face and showed him the mirror after withdrawing the cannula, the patient felt much at ease and confident, realizing that the procedure was simple, quick, result oriented and wasn’t that uncomfortable.

After insertion of 10 COG threads, five on either sides as the patient saw his new rejuvenated look in the mirror, he already felt very happy, and the results were only going to improve further with each passing day since the threads in place would only dissolve in about 3-6 months and would in turn stimulate production of collagen which would tighten, lift and volumise the face further, the results would in turn last for about 2 years. We are planning to insert the undereye threads for him on his next visit which is after 6 months but the patient is already thrilled with his youthful appearance. There is just so much difference that thread lift can bring to your face, if we choose the right vectors they can lift your face and your spirits too. 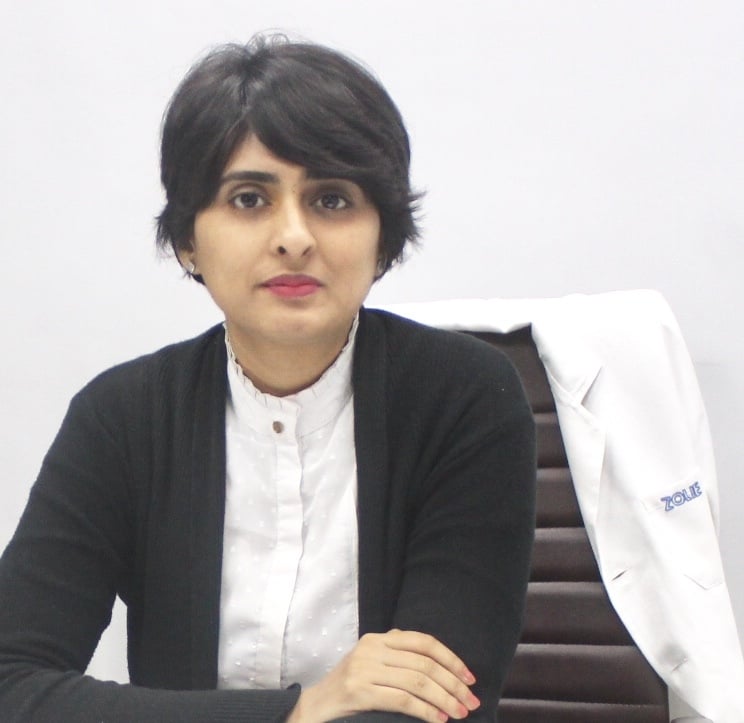